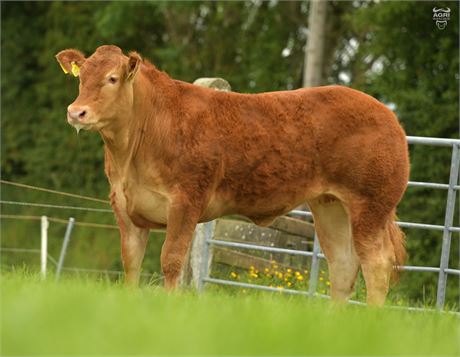 Trueman Rumba is a daughter of Trueman Honey (full sister of Trueman Euphonium) and sired by Ampertaine Magnum. Honey has bred Trueman Mozart, Champion at Carlisle and sold for 15,000 gns and a daughter Trueman Miranda which sold for 7,000 gns whose first daughter sold for 10,000 gns at Red Ladies 2020 for her new owners. Honey was Reserve Female Champion in Balmoral and Rumba has the potential to follow in her footsteps. Rumba exhibits great length and depth of hindquarter as well as size for her age. Another great prospect for the future.

Rumba, has potential to follow in her mother’s footsteps in the show ring while developing into a fantastic profitable breeding cow. Rumba is classy from muzzle to tail, get on early & Bid to win your Rumba lady.