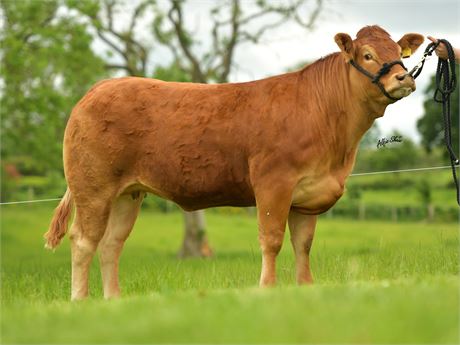 Priscilla is an elegant young in calf heifer. She has tremendous size.  Her mother Lynderg Lucy is by the French bull Ocean, and Priscilla is her first calf. In 2000 Ocean was Limousin Overall Champion Balmoral.  The Ocean progeny are stylish, easy fleshing and known for passing on a lot of milk to the females.  Priscilla has style and character coming from her sire Lynderg Hero who is an exceptional breeding bull known for producing quality offspring.  He was Male Champion at Balmoral 2013 at 16 months and Reserve overall Limousin Champion 2014.  Same year he was Male Champion and Reserve Limousin overall at the Royal Highland Show.  Hero has produced sons to 20,000 Lynderg James, Carnew Millreef 14,500 and Carnew Lionheart 14,000.

Priscilla represents a champions breeding line from the Lynderg herd, a true cow maker ! Don’t miss this Red lady she will be a great addition to anyone’s herd .