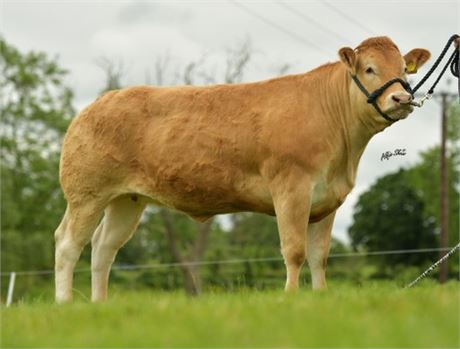 Princess is a heifer bred from the French bull Ludo.  Ludo was purchased in France in 1998 as a 3 year old bull.  The following year the Haltcliffe herd bought a daughter of Ludo called Renoncule who went on to produce Haltcliffe Vermount, the first 100,000 Gns Bull sold in Carlisle.  In 2002 Ludo was The Royal Highland male Champion, same year he became male Champion at The Balmoral Show. Francesco dam to the Princess is a beautiful cow by Lynderg Dimitri, several of her daughters having been retained in the herd.

Princess is in calf to Ocean so you can be sure the progeny of this mating will be stylish, easy fleshing backed up by a milky trait proven by its sire Ocean. Princess was AI’d on 28th February, & due on the 8th December.  Scanned carrying a bull calf.  She has one F94L gene and one NT821 gene.  Ocean is an easy calving bull with a calving ease figure of - 1.2.

Princess is an exciting prospect representing a true French line from her sire Ludo, and carrying  a bull calf to ocean , don’t gamble on your breeding lines this is a real opportunity to secure a princess!