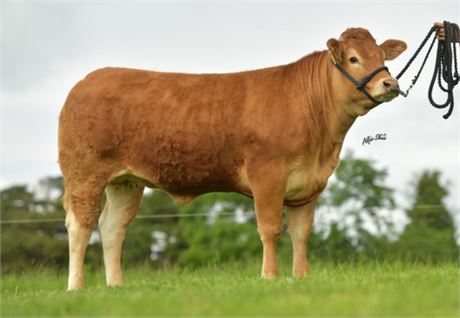 Pearl is a young in calf heifer representing the easy fleshing qualities of her sire Ocean bred in France by Stephan Goursolas. Ocean was purchased in 1998 and was Limousin Overall Champion at Balmoral in 2000.  He produces cattle with style, great maternal traits, and recognised for passing on a lot of milk to his females.

Pearl’s mother Molly is a daughter of Hero she our biggest cow and showcases both size and breed character. Molly’s first calf Lynderg Onyx was sold into the pedigree herd of Ian Barr, Antrim. Together with Ocean & Hero there is a depth of proven championship breeding. (Ocean, Balmoral 2000, Hero, Balmoral 2013, Highland 2014) packed into the genetic make up of Lynderg Pearl she is a smashing in calf heifer with a fabulous bloodline. Scanned carrying a bull calf due approx. 14th December to Gleneagle Pascal who has two F94L genes and a calving ease figure of – 0.07

Pearl has style, class, breed character, sure to be milky,  bid to buy Lynderg Pearl with confidence!