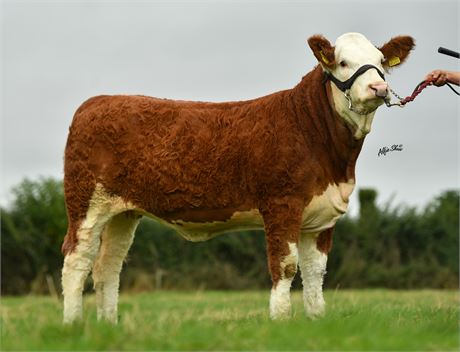 Melon is once again full sister to lots 1, 2 and 3 not often does as consistent a batch of females come available for sale from one cow. A heifer with a great width great scope and with a real good top line and pelvic. She is the makings of a proper breeding female and if she is anything like her dam she will have an abundance of milk. Sired by the super breeding bull the €15,500 Curaheen Gunshot P making her full sister to National Champions Klum and Kellogg's.

Dam Rathnashan Heidi is our latest super star cow who was shown successfully including once National Champion and twice Reserve National Champion and many more. Heidi's first two sons Klum and Kelloggs were both National Champions in 2019 and were both sold to the Corskie herd Scotland and her first Daughter Love Bug P was sold for €7,500 to the Backmuir herd Scotland in our heifer sale last November. Grandam Curaheen Dancer (who goes back to Delfur Poppy) is our foundation cow that has had a great influence on where the herd is today. Her first son and full brother to Heidi was male Champion in Tullamore at just 8 months old as well as breeding Harriet and Heidi who were show successful and are breeding exceptionally well in the Rathnashan herd.