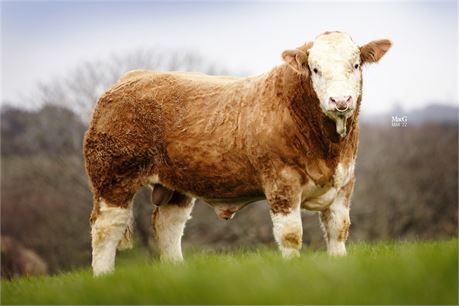 The Bosahan herd owned by the Olds family, of Constantine, near Falmouth, has been in the family since 1964 and was a dairy enterprise for 42 years. However, due to a change in circumstances, they decided to sell the Trewardreva dairy herd in 2005, and concentrate more simply on the home farm, which is made up of 50 acres of permanent grassland.

The Pedigree Simmental herd was established in 2006 when John, having been impressed by the temperament of the Simmental breed, purchased four-second calvers. Three months later in May 2006, they came home from the Bristol Society sale with several additions to the herd, including a stock bull Winford Storm by Blackford Harvester and three females, Atlow Petruska, Beanhill Penny and Grangewood Paris. These seven foundation cows went on to produce an impressive 17 heifer calves in three years.

The Bosahan herd calves from October through to March and heifers are calved down at around two and a half years old. The cows are housed over the winter, and fed on homemade silage and rolled barley.  All cattle are turned out in April and cows with calves at foot, and in-calf heifers, run with a stock bull in two separate groups.

Louis has proven bloodlines for easy calving and fleshing suiting both pedigree and commercial breeders. Grand-Dam was purchased at the Hockenhull dispersal sale. The Natalie line has served the Bosahan herd well producing exceptional nurturing females with the ability to wean calves in excess of  50% of their own mature weight without losing condition.

Louis is a heifers calf, the other bulls from this family have been sold off-farm.  The Sire of Louis is Ranfurly Confederate C24 classified excellent 94 needs no introduction bred in Northern Ireland by David Hazelton and used by top herds throughout the five nations. Louis has been commercially fed since weaning through an out of parlour feeder on a 13% Beef Finisher nut with added yeast + quality dry silage and barley straw. His DLWG between 15.01.22 & 18.02.22 was 1.88kg

Class Winner of the South West Simmental Club Virtual Herd Competition 2021, Louis has exceptional potential and will prove to do a fabulous job for any pedigree or commercial herd and is suitable to use on heifers.