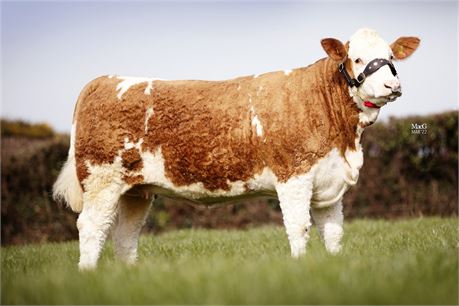 The Bosahan herd owned by the Olds family, of Constantine, near Falmouth, has been in the family since 1964 and was a dairy enterprise for 42 years. However, due to a change in circumstances, they decided to sell the Trewardreva dairy herd in 2005, and concentrate more simply on the home farm, which is made up of 50 acres of permanent grassland.

The Pedigree Simmental herd was established in 2006 when John, having been impressed by the temperament of the Simmental breed, purchased four-second calvers. Three months later in May 2006, they came home from the Bristol Society sale with several additions to the herd, including a stock bull Winford Storm by Blackford Harvester and three females, Atlow Petruska, Beanhill Penny and Grangewood Paris. These seven foundation cows went on to produce an impressive 17 heifer calves in three years.

The Bosahan herd calves from October through to March and heifers are calved down at around two and a half years old. The cows are housed over the winter, and fed on homemade silage and rolled barley.  All cattle are turned out in April and cows with calves at foot, and in-calf heifers, run with a stock bull in two separate groups.

BOSAHAN L'AMOUR FLIRTY TRESOR is a fantastic young heifer she will become the very first progeny of Kinclaven Infusion 17 (P) to be offered for sale. We purchased Infusion at the 2019 February Stirling bull sales and subsequently  he was shown with success. Our choice was influenced by a maternal bloodline achieving Royal Highland awards coupled with a sale-topping Omorga Samson as the grandsire. Infusion's polled line outcross followed our previous stock bulls  Skerrington Armada  and Heathbrow Freddie Star 14 (P).

L'Amour's Dam is Bosahan Flirty Tresor she has produced six calves to date with an average 357-day calving index. Her first calf, Bosahan Hollie Flirty P, was top maiden heifer at Worcester sale despite being the youngest in her class, two sons have been sold to commercial herds Bosahan Imperial and Bosahan J'Adore. We have retained a heifer and Flirty currently has a polled bull calf at foot. Regardless of sire this maternal line has always produced impressive calves and goes back to one our foundation cow Grangewood Paris.

Class winner in the South West Simmental Club Virtual Herd Competition 2021 BOSAHAN L'AMOUR FLIRTY TRESOR is a quality head-turning, stylish young heifer, with a pedigree line that supports every trait our breed is known for. Bid with confidence and secure L'amour Flirty Tresor.