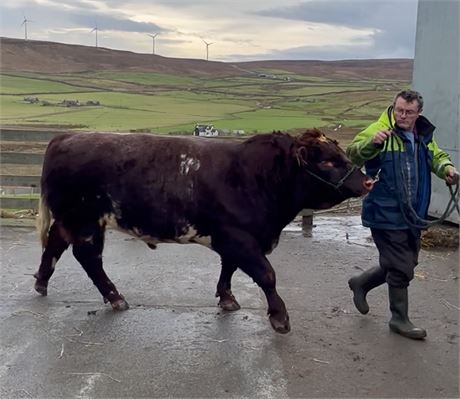 Our seller, Michael Cusiter, herd prefix Lagas was established at Laga Farms, Evie, Orkney Islands, just off the Northeastern coast of Scotland. The Lagas herd is well known for producing cattle that are grazed on natural fertile land thriving in cold hard conditions for many months of the year.

Lagas Oscar is a stylish, head-turning bull. Fantastic dark roan Shorthorn. He's a real meat machine that will produce easy fleshing progeny, His Sire, Pentland Emperor was an impressive specimen winning the Shorthorn championship at the Orkney show for a number of years and was crowned overall champion in 2016. Emperor a son of Chapelton Wildfire whos a full brother to ChapeltonTyphoon, proven back breeding that is known from Orkney to Cork and everywhere in between. Oscar is worthy of a second look just on his sire line however take a look at his maternal lines his Dam Shawhill Florence Gertrude stood as Reserve Champion Female at Stirling in 2014, She's a real classy dam and always produces easy fleshed stock with Oscar being no exception. If it's beef or pedigree or both Oscar will tick each of these boxes and more. Genetic Test Results Myostatin: E226X-1 , F94L-0 , NT419-0 , NT821-0