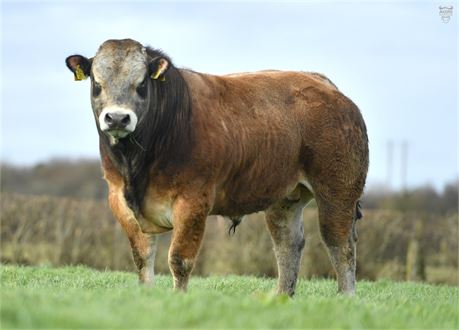 Our seller, Niall Stoddart’s herd known as Longford Parthenaise is based between Portumna and Ballinasloe, Co Galway. Niall's farm comprises of a Spring calving Purebred and Continental suckler herd, Purebred Blue Texel sheep and some tillage. Niall breeds Parthenaise stock for “Power and Style”. In late 2005 Niall came across the Parthenaise Breed by chance while working on Anthony Scallys farm in Co. Westmeath. Anthony Scallys' prefix widely known as Ailsbury herd had some stylish bulls in a shed which immediately caught Niall's Eye. Niall purchased a bull called “Ailsbury Victor”, he knew that Victor was an investment and would bring the power and style with his limousine cows. With the addition of Victor to the herd, Longford Parthenaise was established in 2006, following this Niall made a trip to France in March 2006 where he purchased his first Parthenaise Female Trio of an in-calf cow carrying a heifer calf, with a heifer calf at foot breed by the renowned Lassie Herd in France. In 2007 Niall bought another cow in France and became involved with the Irish Parthenaise society. When Niall got married in 2009 the society kindly gave him a wedding present of a heifer from the Boley Herd bred by William Shiel, Co. Laois. These cows have formed the foundation for his 20 purebred cows in the herd today from there on it was the start of an exciting journey for Niall at Longford Parthenaise. Niall has had animals sold in recent years to Greece, UK, Northern Ireland, and Republic of Ireland. Niall is a strong believer that data paints the true picture on farm, he noticed his first batch of Parthenaise calves weight gain was 50kg heavier than the other continental breeds used previously on farm and higher docility meant that the breed would be here to stay!
Niall has always used top 5-star bulls and preferably French outcrosses namely “Taisa, Eturdi and Implosif. He had the French Junior champ Eturdi on the farm from 2010-2012 Eturdi this bull brought further shape and style to the herd and Niall is very happy with his breed of choice Parthenaise.

Longford Raymond was born on 11th April 2020, sired by a popular French Bull “Implosif”, Dam is Longford Katie-Marie, which is one of my most stylish cows in Nialls herd.
Raymond is a natural muscular eye-catching young bull, he is proving to put plenty of shape and elegance into his offspring, currently some calves on the ground to back up Raymond’s quality. He is €120 for replacement, €146 for terminal, making him 5 stars across the board. He is2.0% for calving difficulty on cows, and 7.1 on heifers.  Weighing 700kg. Can send pictures of his calves.