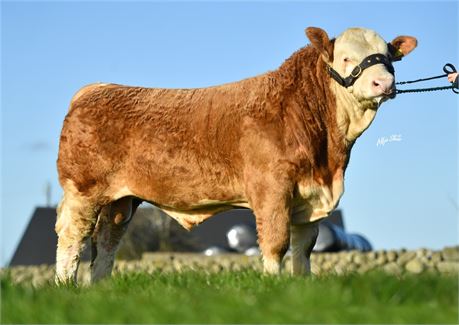 Veaghmore Mark is a polled, easy fleshing powerful young bull correct in every way. He is a lovely gold and white bull full of style and charisma.

Mark is full of some of the best breeding that’s on offer in the Simmental breed on both his parent's bloodlines. Veaghmore Mark's Grand-dam has produced some notable progeny including Kilbride Farm Gruffalo who was sold for 10,000gns at Stirling a few years back and a daughter sold last year for 4,500gns at the 50th-anniversary production sale with other daughters retained in the herd for breeding. Marks sire Kilbride Farm Jetstream P is well known for his ease of calving, and low birth weight but is also noted for the 200 and 400-day growth rate. Jetstream P has been retained in the Kilbride farm herd for their stock bull duties and can be seen in the Simmental annual review 2021.

Mark 21, has real potential to have a great future ahead of him with a power-packed pedigree he can make a great impact on any herd. Pricing Mark 21, wasn't hard he is here to sell. "every bid is worthy of his value and more" place one bid at a time or place your proxy bid (Max Bid) be it one bid at a time or a proxy bid, be first and be last to bid - secure Mark 21, his price & progeny will be the value of the day.

Our seller Dermot Rooney owns the Veaghmore Simmentals herd located at the foot of the Mourne Mountain overlooking the Irish Sea in picturesque Co Down. The herd was established in 2007 initially using Simmental bulls on the commercial herd but has since converted to a full herd of pedigree females. To lay the foundation for the Veaghmore herd, females were purchased from some of the top herds including Ranfurly, Rathnashan, Knockreagh, Bannhill farm and Kilbride farm. The herd has also changed to 100% A’I to give the chance to widen the breeding lines and cross the best bulls available with our females. Veaghmore herd aims to breed a good powerful Simmental that will go on and breed well for many a year. They are members of the AFBI Herd scheme.