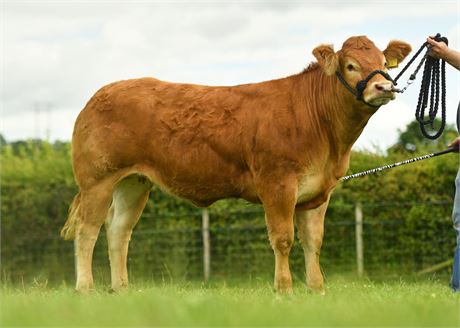 Another smart young heifer from the combination of a Hero young cow Lynderg Milinda and Telfors Munster.

Lynderg Hero an exceptional breeding bull, passing on great size to his offspring, he was Male Champion Balmoral 2013 at 16 months and Reserve Overall Limousin Champion 2014. The same year he was Male Champion and Reserve Overall Limousin Champion at the Royal Highland Show.  He has produced sons to 20,000 Lynderg James, 14,500 Carnew Milreef and 14,000 Carnew Lionheart, along with Lynderg Renee, a heifer at 9 months sold at last year’s sale for 7,600.

Sophie’s sire Telfors Munster was reserve intermediate champion at Carlisle in February 2018 and was purchased for 20,000gns. He is a great pedigree which includes sires such as Lodge Hamlet, Goldies Comment, Apertaine Bravo and Goldies Terence.  His calves are small at birth with a short gestation.